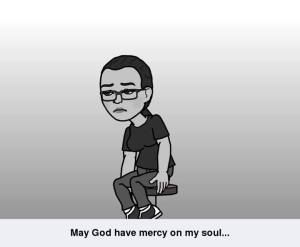 This is the story of an old lady named Iris V.  She was my neighbor; lived only one apartment away from mine.  Her only living relative was a brother, but she lived alone.  I think she was divorced but never had children.  She took care of her sick mother.  She would often share her experience about how her mother passed away on her arms.

She spent her lonely days sewing, knitting and making all sorts of beautiful handicrafts.  She was a member of a nearby church.  Even though she was my neighbor, I met her at a Bible study in the apartment below mine.  Her pace was slow and so was her speech.  But she understood everything clearly; her mind was alert and she had lots of memories to share.

On a very sad day; she fell in her bedroom and broke one arm.  Nobody could hear her screams for help; she couldn’t get up.  She spent all night crying with pain on the cold floor of an empty apartment. The next day a lady neighbor from the floor below was the one who discovered what was going on because she was the one who visited Iris V. constantly to check on her.

Iris V. was taken to the hospital and after a while there; she was back in her lonely apartment.  But soon after that, she fell again and this time her brother made the decision of taking her to a nursing home.  Iris V. was happy because she thought that she would continue with her handcrafts; at least she wouldn’t be alone anymore.  She was wrong.

She wasn’t allowed to do anything, just lay on a bed all day.  The nurses said that if she did anything she could hurt herself or hurt somebody else.  The Bible group visited her once in September of last year.  We sang to her, read Bible verses to comfort her but the group leader made the mistake of promising her that the group would visit her at least once a month.  There were plans of visiting her; but for one reason or another; those plans never materialized.  No visit for Thanksgiving, or Christmas, or New Years.  There was no visit for Valentines not even on the Holy Week.  Now summer is here…

Today I saw my next door neighbor Maria.  She told me that she went this past Saturday to visit Iris V at the nursing home.  There she was informed that Iris V. had passed away since June 7.  Her brother had taken care of all the funeral proceedings and never told anyone about it.  Why would he, right?  If her church didn’t bother to visit her, her pastor didn’t even call or send anyone to comfort her, her old neighbors were too busy with their lives….why should he call?

I feel guilty because I only saw her once.  I’m not proud about what I did and I regret not being a good neighbor.  I wasn’t even a good Christian.  And I know I’m not the only one who should feel like this.  She had a church, she had a pastor, she had people who promised to seek her but failed to keep their promise.  Nobody came; just one neighbor who’s not even a Christian.  Shame on us!

While God forgives us this sin; let this be a lesson on how to treat our neighbors.  God really meant it when He said: “Love thy neighbor”.

It would have made a whole lot of difference in the last days of Iris’ life.  We would have obeyed His word….  RIP Iris V.

5 thoughts on “We Failed Her…”