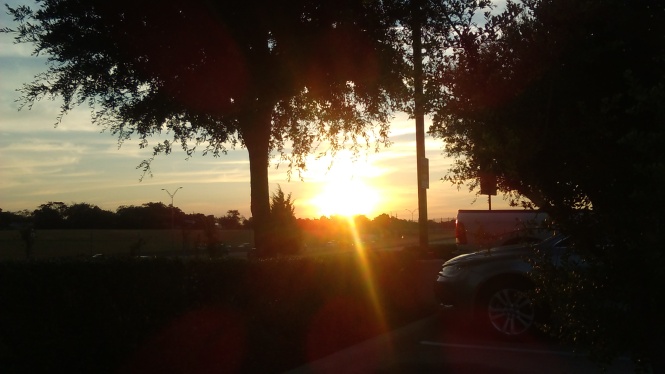 A year ago December 2014, I had a dream.  I still can remember it like it was yesterday.  I was at my apartment in Puerto Rico.  I saw myself walking from my room into the hallway.  When I reached the living room, I saw my younger sister at my left getting farther away from me.  As I approached the balcony, I noticed my brother there, he seemed kinda worried.  The upper gates of the balcony were missing and when I looked at where there was supposed to be the airport; all I could see was a different view.   I thought that all that was happening to me was real until I felt my self floating in the air. The landscape that I was seeing was all green, like if I was observing it all from an airplane.  Then, I looked at the sky and the clouds were moving in front of me.

I asked the Lord: “What are you showing me, Lord?”  Then I started to see lots of different faces of people unknown to me and when the images all ceased, two big words appeared in front of me: “Great Changes”.  I woke up, and I prayed meditating on the significance of this dream.

Today, one year later December 2015, I have seen the outcome of that dream.  In less than a year, my life has been turned upside down and it’s still changing.  I had to leave my apartment in front of the airport; and even the upper gate of the balcony was removed the same day I handed in the key. I had to leave my sisters back in PR the day I left the island I had called “home” for the last 41 years. I saw that same green landscape from the window of the plane that brought me to Texas. My brother who lives in Colorado, has kept a close watch on me since I arrived, always worrying if I’m doing OK.  I have met so many new faces since I arrived….I have lost count.  But my new experiences have not stopped.

I came to Texas as a new bilingual teacher for a charter school.  I worked really hard to do the best that I could. I worked seven days a week. I was never late for work, I was never absent….I followed every rule the administration asked for, my lesson plans were always on time.  My students and their parents liked and respected me; specially those that were mischievous.  I would think that I would survive the whole year doing what I should do.  I had group control; lessons were being imparted but there was a change that I did not expect.  The principal that supervised me, didn’t like me.  For some unknown reason she felt that I was not doing my job right.  She didn’t like that I got sick (even though I went to work sick to avoid an absence), even though I used her recommendations in the classroom, it was never enough for her.  The administration suddenly gave me a transfer to PreK (without me asking for it) but she managed to retain me for one more week so she could get me fired.  She used excuses that had nothing to do with my performance as a teacher.  I just prayed and I didn’t defend myself.  But she made a whole story to the administration and she got her temporary victory.

After three months of working hard, on Friday November 13 I was suddenly unemployed.  I received my last check to sustain me.  But God had not let me go.   I was utterly disappointed, to the point that I questioned the reasons why God had made me leave what already was familiar to me, to bring me to a place almost unknown and go through such hardship.  But very soon, He let me know that He has been with me all the time.

I recalled the way He brought me to Texas.  It was impossible for me, without any income at all to leave my home and arrive to Texas.  He made it possible.  Since the day I arrived, He had sustained me in every way possible.  He kept me safe from accidents, He fought for me and comforted me.  He keeps doing so.

Today, December 20, I am currently working in a Dallas government office, plus tomorrow I have a very interesting job interview and my daughter and I are doing fine.  He keeps a close watch on me; His providence never leaves my home.  I depend solely on God.  He opens and closes doors.  I am actually happy that I’m not a teacher in that school anymore.  I know something better is coming. That old principal thought that she was harming me; but the truth is that she was doing me a favor.  God is putting me in a better place.  He will make me rise and soar with His blessings.

If you are going through a difficult time in your job; lift your head up.  Depend on Him.  He will make you rise.  Don’t lose your faith.  He’s not over yet.